Teotihuacan was a massive pre-Columbian city in the first millennium CE. Its influence spread far and wide across Mesoamerican cultures, affecting politics, economics, culture, and more. Currently, Teotihuacan covers 83 square kilometres, and has been a UNESCO World heritage Site since 1987.

The founders of Teotihuacan is shrouded in mystery, as are its early founders. Archaeologists once believed that the city was built by the Toltec civilization, based on Aztec writings which claim the Toltecs as architects. However, the word Toltec also means “great craftsman”. Further, Teotihuacan was built before the rise of the Toltec culture, making them unlikely candidates for the honor of “builder”. Until more evidence is uncovered, it will remain a mystery.

Between 150-450 A.D., the city was home to over 150,000 people (some estimates are as high as a quarter of a million). This cultural center influenced much of Mesoamerica. Teotihuacan’s craftsmen, jewellers, and potters were renowned for their skilled, and traded their goods far and wide.

During the 7th and 8th centuries, the city was sacked and burned. At first, it was believed to be the fault of raiders. More detailed study reveals an interesting detail – palaces and temples were burned, while most other buildings were left alone. Most of the damage was done to civic structures along the Avenue of the Dead.

Associated archaeological evidence also suggests that droughts led to famine and death. There is a rise in the number of skeletons showing signs of malnutrition in the 6th century. The decline of Teotihuacan would leave a hole to be filled by other Mesoamerican cultures, notably the Mayans.

The disappearance of this multicultural city leads to more questions than answers. 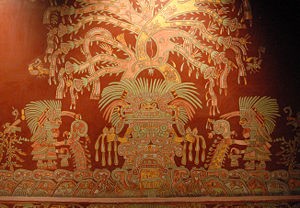