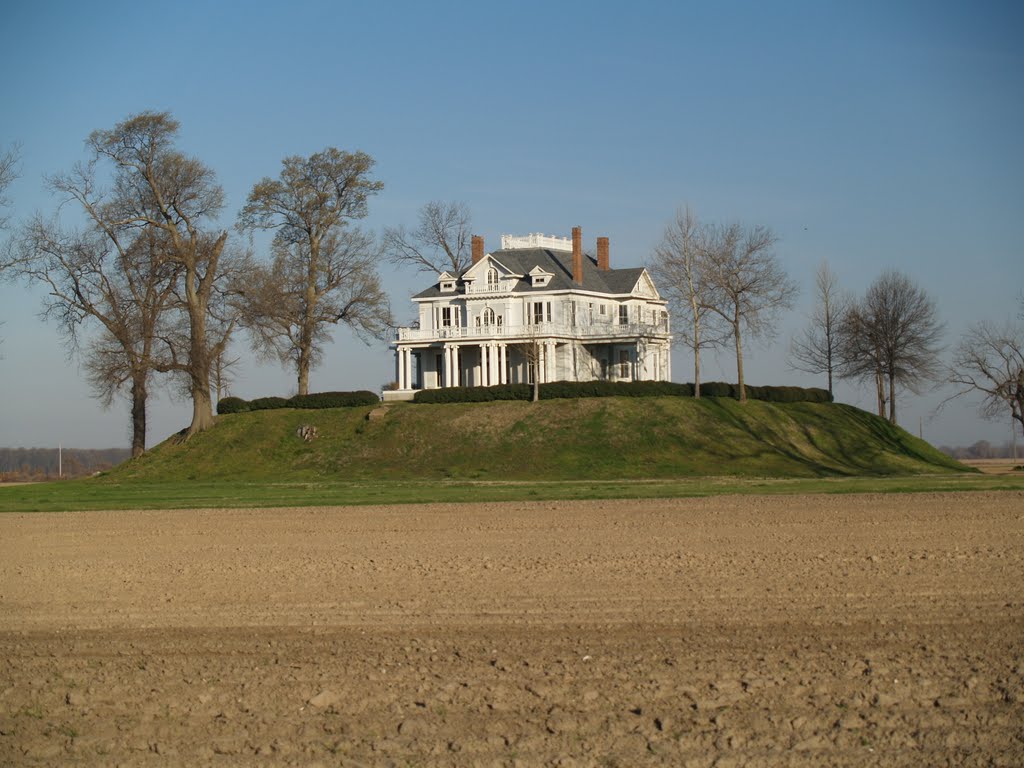 The story of Mont Helena, a Colonial revival style home built atop a ceremonial Indian mound in the Mississippi Delta, is fascinating. It provides the sort of evidence I´ve been looking for that indicates a supernatural or metaphysical “power” or “presence” associated with the ancient Indian burial mounds peppered across the United States.

Mont Helena is a powerfully-mysterious site to behold – described as a “must-see” site on the Mississippi Mound Trail and “one of the state’s most photographed landmarks.” The site is said to have had as many as three mounds in the past, but there is only one left today.

Currently 26 feet tall, its original dimensions were even more impressive. Roughly 10 feet of mound fill were removed in the 1870s prior to the construction of the beautiful Victorian neoclassical home now located on its summit, and flood deposits have likely buried several more feet at its base.
“Mont Helena has always had the reputation for being haunted,” says Leslie Miller, chairperson of the Friends of Mont Helena volunteer organization, which maintains the home. “Area residents have told stories of sightings of a lady dressed in a white gown either looking out of a window or standing beneath the trees in the front yard. Former residents of the house have also told stories of unexplainable occurrences.”

Friends of Mont Helena volunteers and hired workers also share tales of unexplained phenomena. This past spring during their production of the play Mont Helena: A Dream Revisited, several actors heard footsteps and witnessed cups moving across a table.

Before Helen and George married, she was engaged to Henry Vick of Nitta Yuma, and they were to be married in 1859. “But a promise kept ended in a love lost,” explains Miller. “Henry was killed in a duel days before he was to marry Helen. He was buried on what was to have been their wedding day. As she stood by his grave, Helen pledged her eternal love to him.” Helen died at Mont Helena in 1917. According to Miller, “Those surrounding the dying Helen said she called for her Henry, saying, ‘He’s coming for me.’ Because of the tragic love story, the house has its own mystique surrounding it.”

In 2010, the MPS team documented seeing shadow figures, hearing footsteps and voices, and photos “with orbs that weren’t dust or moisture in front of the lens or on it, and some EVP’s that gave us chills,” says Riley. One of the most chilling EVP’s, however, came after Miller and her friend were talking on the second floor, and one asked the other, “Are you scared?” A few seconds later, a female voice whispered, “Don’t be scared.” In another EVP, Riley asked aloud if Henry Vick was shot and heard the answer, “He was shot.”

The second visit did not bring as much activity but did garner evidence of orbs.