Freemasonry’s Square and Compasses symbol is a mystery to the media, scholars, historians, and even to most Freemasons. No one knows where it came from or what it means. We’ll see how this symbol actually holds an ancient, mystical, and magical meaning that can “illuminate” initiates. 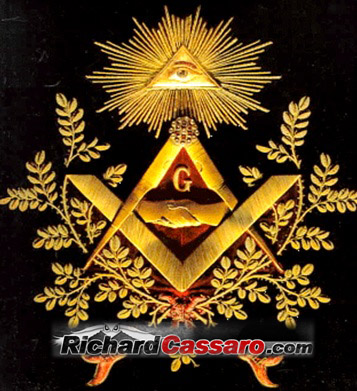 The Masonic Square & Compasses with a “G” in the middle,
capped by the Mind’s Eye (Third Eye) in the Triangle.

Most Freemasons, when asked the meaning of their Square & Compasses logo, state:

However, the Square and Compasses logo has a meaning that goes much deeper than merely teaching lessons. Notice how the Compasses tool on top draws a “circular” shape:

The Square tool on the bottom draws a “square” shape:

When placed together, as in the logo of the Freemasons, the Compasses tool and the Square tool form a square and circle:

The square and circle shapes are related in Euclid’s 47th problem of “Squaring The Circle,” said to be the primary goal of the Masonic craft.

Squaring the circle, however, does not in this case refer to a mathematical problem: it is a spiritual reference to man’s instinctive quest to harmonize our physical and spiritual natures.

The Square & Compasses thus symbolize Man’s state as an eternal soul manifesting in a temporary body. The circle is our spiritual side that cannot be seen, heard, touched, tasted, or smelled. It is our true, inner, and perfect Self, the part we feel when we close our eyes and think “me”.

“In Renaissance poetry generally, the circle was a symbol of perfection and…a symbol of the human soul.”

The Compasses, however, are bounded by the Square; our circle is bounded by our body. Think here of a four-sided square, and of how we experience Nature in “fours”:

Four represents the imperfect, physical body, as well as earthly desires and carnal appetites that “weigh” the body down. Human life is vulnerable and temporary, in stark contrast with the invulnerable and permanent soul.

“…the compasses stand for…the spiritual side of man, while the square appertains to the material world…the square represents matter. In the case of the compasses… they represent…the Spiritual.” 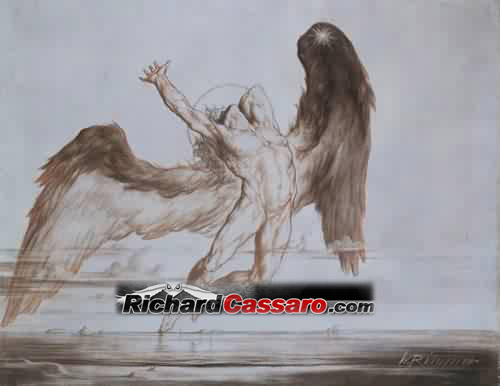 Above: William Rimmer, Evening, Fall of Day (1869). This is an esoteric portrait that depicts the history of what has happened to each one of us when the “god within” or “soul within” Incarnated as Man.

We have all fallen and descended into matter, which is the material world in which we now live. The two tools Square and Compass symbolize Man’s “double nature” after the Fall:

Interestingly, many scholars and philosophers have remarked upon this type of symbolism in the Square & Compasses:

“…ancient mythicism considered and named those souls incarnated on earth as “the dead.” “To die” was to incarnate; “death” was…the “tomb” of the flesh.”

“The human body is the “tomb of transformation” ; the grave into which the soul descends for the purpose of working out its own salvation, for transforming and improving itself, and ascending out of it the stronger and wiser for the experience.”

The Greek philosophers understood this concept and even went as far as to say the soul is “imprisoned” in the body, because the body must be cared for, and must constantly:

The body cannot endure forever, and will eventually be destroyed by death, at which point the soul is free again.

The soul, though trapped in the human body as we are today, is far from powerless. Because it is eternal, the soul comes complete with its own inherent powers—powers that can be rediscovered and exercised right here in the material world.


Though in a “fallen state” the soul never lost these powers; they have merely been “covered up” by the body, rendering them unrecognizable.

Masonry exists not only to reveal to Man the presence of his inner soul, but to help him rediscover its higher powers, powers that have been covered up by the very body he inhabits.pace

The recognition of these inner powers is the key to squaring your circle, or becoming a god living on earth as a mortal rather than a mortal striving to become a god. This idea is what the ancients call the Vitruvian Man:

Note how da Vinci draws The Vitrivian Man inside a squared circle: he understood the implications of the Masonic doctrine.

Da Vinci was not the only famous artist to create a Vitruvian Man, neither was he the only artist to associate it with both a circle and square: 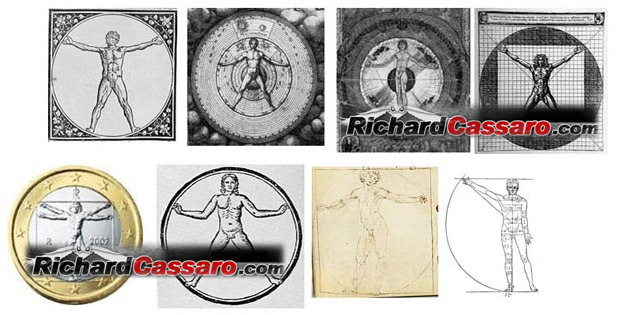 The Vitruvian Man lives in a perfect state of balance, enjoying a well-intentioned life, esoteric, stable, kind, capable and abundant. The circle is his eternal soul. The square is his temporary body. He knows this; he is illuminated into its gnosis.

The great Freemasons of past eras were Vitruvian Men, including Washington and Franklin. This is because they understood Freemasonry, unlike the modern Freemasons who have lost the depth and symbolism of their tradition.

Notice the massive circle behind Washington: 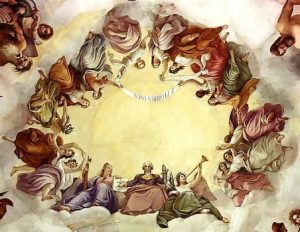 Above: The Apotheosis of Washington is a masterful piece of artwork that appears inside the dome of the U.S. Capitol in Washington D.C.

This apotheosis is not “man becoming a god” or “Washington becoming a god.” That’s a critical misinterpretation. It’s more like “man realizing he is a god already”, a soul manifesting as a body—or, in symbolic terms, a circle surrounded by a square.

This “heretical thinking” of Freemasonry is much different than mainstream Christianity; which is why the Freemasons have historically been a Secret Society.

All of this Square and Compass wisdom is based on ancient wisdom, and not just from one ancient culture. The Egyptians and Chinese, two ancient cultures that scholars believe were never in contact, both used a circle symbol to denote the “soul within”:

Left: Egypt’s Aten glyph is formed by a circle with a dot in the center. Right: China’s ancient Yin Yang symbol is a circle with twin fish symbols inside.

The Tai Chi is the eternal Self. The Self sprouts “pairs of opposites” during manifestation—the twin fish symbols inside, one black the other white.

The Egyptian Aten is the eternal Self also. It was often drawn as a winged disk (see below) sprouting twin serpents and wings.

Both the Tai Chi and Aten symbolize our perfect eternal “soul within” or circle within. Both symbols often appeared above the main entrance to temples and important religious and spiritual buildings in ancient Egypt:

Above: Egypt’s “winged sun-disk” (Aten) by Secret Societies like the Freemasons, Spiritists, Theosophists, and Rosicrucians.

They symbolize the perfected, eternal soul, a state that every human being must achieve (i.e., Buddhahood, Christhood)

“For the Egyptians, the meaning of life was to recognize that we are not the physical body that incarnates in world of matter, but the still, silent soul “point” within the body that predates the body and that survives the body’s death.

“The circle…represents the omniscient state of the soul when it has attained full consciousness, is liberated, and lives apart from matter.”

—Thomas Wilson, Swastika the Earliest Known Symbol and Its Migrations

This idea is conveyed in the Gothic cathedral facade—the rose window in the center, which symbolizes the perfect circular “soul within” us.

“the rose window is… a representation of perfection, balance and harmony of the purified soul”

Note how in Rose Windows the Square and Circle are blended together, the “squaring of the circle,” the goal of every Freemason:

Above: Exterior of the west rose window, carved in the 12th century

Above: Detail of the Gothic facade of the Orvieto Cathedral, the rose window.

Masonic buildings are sacred structures of initiation, encoded with intricate patterns and artwork that speak to squaring the circle; they are heavily laden with a language of symbolism that modern scholars have yet to decode.

It’s not just the Gothic cathedrals. In all Masonic buildings we see the interplay of squares and circles. This is a constant Masonic geometric theme, the spiritual / divine light (our soul) manifesting in the physical / material world (our body). 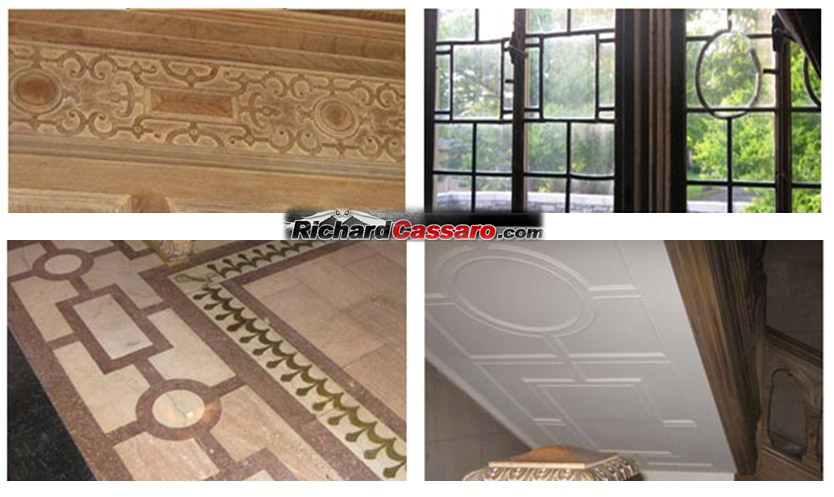 Above: These pictures showing Masonic square and circle symbols interlaced were taken inside of Reid Hall, a Masonic-built castle which was constructed in 1864 and is now home to Manhattanville College in Purchase, NY.

This article, then, has laid bare the lost secret of Freemasonry: It is that man is both a Square (body) and Compass (soul). This secret, once a common doctrine in the ancient pagan cultures, had to be hidden away and kept secret from the Holy Inquisition for fear of reprisal.

Its wisdom teaches the forbidden doctrine that each of us deep down is a “god” encased in matter, a soul inside a body. We can clearly see our body; but the Compass teaches us about the part we can’t see, the soul. This is the whole idea of initiation into a lost sacred wisdom.

The Compass & Square symbolize—they are symbols of—your soul and your body. Your Soul inside your body. You can learn more by reading Written In Stone: