Phrenology is a form of divination used to determine the personality, character traits, and even criminal tendencies based on the shape of the head. Each bump and fissure in the skull provided valuable insight.

Phrenology was very popular in the 19th century, though even then it had its critics. Phrenologists believe that each portion of the brain has a specific function, and the brain is responsible for our thoughts and mental abilities. Today, most scientists reject phrenology.

In craniometry, scientists study the weight, size, and shape of the skull. Similarly, physiognomy studies a person’s facial features. These, in conjunction with phrenology, were used in the past to justify racism scientifically.

The founder of phrenology was a German physician by the name of Fraz Joseph Gall (1758-1828). He was the first to suggest that the brain was responsible for all mental activity. In 1819, Gall published an influential book that spoke of the ability to determine the moral and intellectual tendencies of men and beasts by studying the brain. Through his studies, he believed that each faculty, which represented at aspect of character, was linked to a specific area in the brain.

In the 19th century, phrenology became very popular. Phrenologists were respected, and to the Victorians, even revered. The phrenology was seen as a way to gain insight into oneself, with an eye towards personal growth. Many scientists wrote serious articles on the subject. Other researchers accused phrenology of being a pseudoscience.

In the United States, phrenological analysis was aided by machinery. These devices were used to electrically measure the brain and skull.

Early 20th-century advances in evolution, anthropology, and even criminal at a lead to a resurgence of interest in phrenology. Bernard Hollander, a famous London psychiatrist, attempted to raise phrenology to a science. He urged a quantitative approach to phrenology. To that end, he created a methodology to measure the skull; those measurements could then be compared with statistical averages.

Over time, phrenology was also used to promote racist ideas. For example, the Nazis used phrenology to prove the superiority of the Aryan race. Similarly, Paul Bouts (1900-1999) believed that certain skull shapes were more “primitive”, and were seen in both savages and criminals. He believed that the “higher” civilizations could be identified by their skulls. In Rwanda, colonial authorities used phrenology in the 1930s. They determined that the Tutsis were superior to the Hutus, he pointed few which laid the groundwork for the 1994 Rwandan genocide.

Practitioners believe that the human brain is made of 27 “organs”, unlike the 19 organs found in animals. These organs would determine your personality. By feeling for indentations or enlargements, and measuring with a caliper, a phrenologist would have all the information he needed to determine your character and temperament. 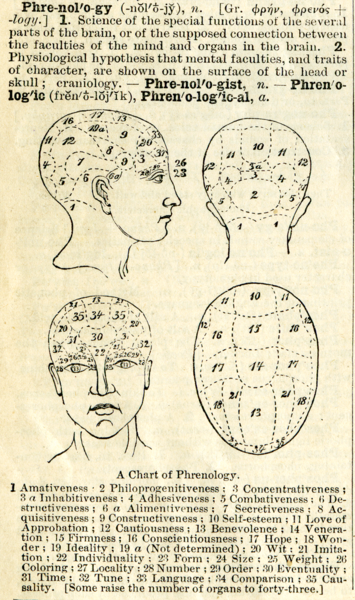