Archaeological evidence suggests that the Olmec practiced bloodletting, possibly as a rite of sacrifice to their gods. Giving blood would allow a “victim” the chance to donate time and time again. The issue of human sacrifice is cloudier. While other cultures show ritual sacrifice in art and other artifacts, no such clues have been found in Olmec culture. Skeletons of infants have been found at El Manati, an ancient Olmec site; however, the cause of death of these children remains unknown.

The Olmecs developed a writing system that predated the Zapotec system by at least 150 years, and possibly up to 400 years. Olmec writing was hieroglyphic in nature, with symbols used instead of letters. There are similarities to later Mayan hieroglyphs, leading to speculation as to whether Olmec writing led to Mayan writing. In any case, more evidence is needed before conclusions can be drawn.

Hematite is a naturally magnetic stone. An Olmec artifact of hematite, complete with a sighting mark, may be an early compass – and it actually works! John Carlson, an American astronomer, believes that the Olmec used compasses over 3000 years ago, possibly to orient the direction of buildings, for the living and the dead.

The Mesoamerican ball game is the source of much speculation. This game has been played using rubber balls for over three thousand years. The Olmecs played it, and passed it on to the Maya, the Aztec, and other cultures. It is believed that the galme had both religious and recreational purposes. Balls have been found alongside sacrificial items, suggesting ritual uses for the game.

Olmec art forms include both statues and small statuettes of jadeite. Most is highly stylized, although some art could also be very natural. Perhaps the most striking example of Olmec art comes from the colossal heads, carved from volcanic basalt. Each head is individual, with unique features. Headdresses are likewise unique, offering the intriguing possibility that each head represents a different person – ancient kings, perhaps, or star ball players. To date, only 17 heads have been found, though some of these monuments were “recycled”, made into new statues.

Little is known of the political, social, and religious life of the Olmecs. Few artifacts have been found, and the language remains frustratingly enigmatic. Between 400-350 B.C., the Olmec all but disappeared. Traces of their influence in mathematics, astronomy, and writing can be traced through subsequent civilizations. 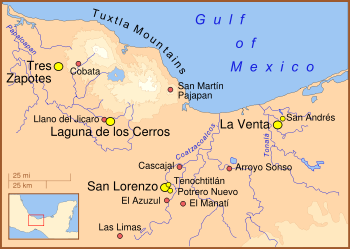