The Great Pyramid of Giza is the largest and oldest pyramid of the Giza plateau’s necropolis, the city of the dead. It is one of the Seven Wonders of the Ancient World, and the only one that still survives to this date. It is also known as the Pyramid of Khufu, for whom it was built over 3800 years ago.

The Great Pyramid is part of a larger complex of funerary buildings. There are three larger pyramids, along with a number of temples, smaller pyramids and mastabas (ancient burial mounds and the precursors to pyramids), and more. A nearby town offered the Giza workers bakeries, beer, and all manner of fascinating diversions.

It is generally believed that the pyramid was built in twenty years, ending around 2560 B.C. Over the years, dozens of estimates have been developed, all trying to explain how such a large building could be constructed with huge stone blocks, and so quickly! The ancient Egyptians used primitive technology to create a building that would challenge modern builders with its size and complexity.

Through historical records and observation, we now know that the Great Pyramid covered 53,000 acres of land, reaching over 480 feet into the air. Today, many of the casing stones have fallen, and it is somewhat smaller in size. Many stones fell in an earthquake in 1301 A.D., and were used to repair and build mosques and fortresses in Cairo. Some stones can still be seen there.

The first precise measurements of the pyramid showed that it was oriented four feet west of North. The other pyramids in the trio were similarly shifted. At first, it was believed that the ancient Egyptians had made a simple error in mathematics, leading to a minor shift. However, after studying the astrology of the past, it became clear that in fact the pyramids were right on – the constellations in the heavens had shifted. The astronomical date gives an approximate date of 2467 BC, in line with current theory.

Until 1300 AD, the Great Pyramid was the tallest structure in the world. The Great Pyramid of Puebla, Mexico was not as tall, though held more blocks and occupied a greater volume of space.

A number of passageways cut through the interior of the pyramid. They ultimately lead to the King’s Chamber, in which his sarcophagus rested. The sarcophagus is much too large to pass through the associated passageway, and in any case may never have included an actual body. It is too short for a medium-sized individual to lie down. The Egyptians were not known to bury their dead with the knees bent, and no lid was found to the sarcophagus, making it an enduring mystery. 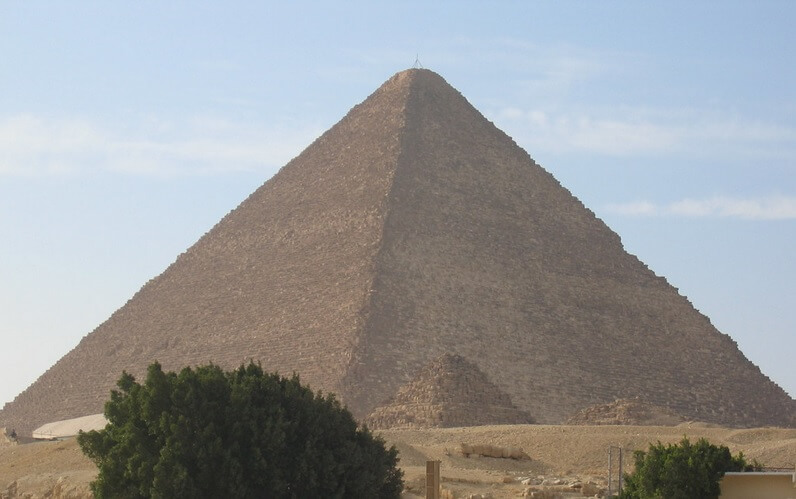