Mosaic art once decorated homes and public buildings across the Mediterranean as far back as the 3rd millennium BCE. Mosaics have been found by archaeologists in far-flung places like Italy, Spain, France, North Africa, Turkey, and Syria. Rather than merely providing aesthetic enjoyment, I believe mosaics were created for a deeper spiritual purpose—as powerful meditation tools (like Eastern “mandalas” and “yantras”) designed to put one into the trance state necessary to awaken higher consciousness. 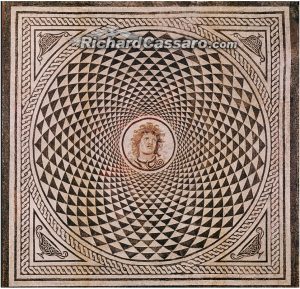 Mosaics—a futuristic science hidden in the ancient past.

If you stare at this mysterious Roman mosaic, you´ll notice something “advanced” even “futuristic” about it. Its sacred geometric pattern is intended to put you in a trance—and for good reason. Scholars have never explained this reason. Mainstream academics think mosaics—intricate art scenes created by setting small pieces of stone or glass, called tesserae, into floors and walls—are purely aesthetic, nothing more. But I´ve always believed mosaics are first and foremost visual aids designed to assist with meditation, helping initiates achieve the “trance” state, which is a doorway to higher consciousness: 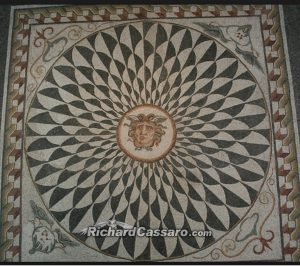 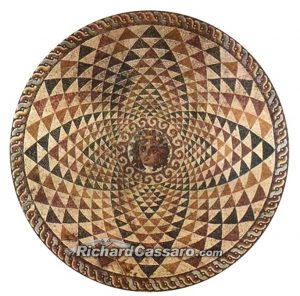 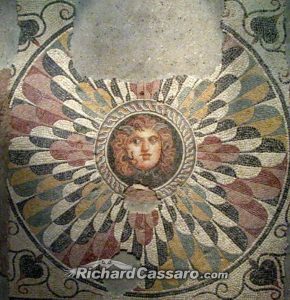 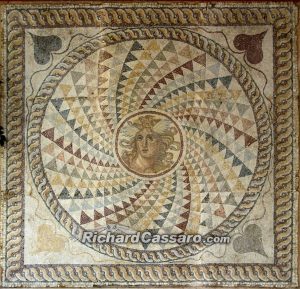 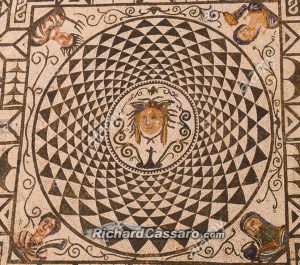 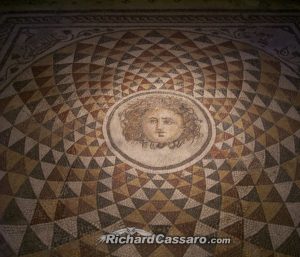 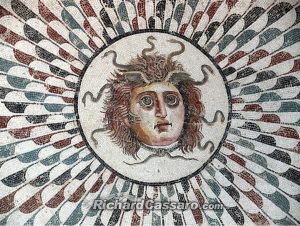 The ancient artists who designed and crafted these masterpieces of miniature stone, seem to have known that optical illusions trick the eye and stimulate the brain—or, rather, “mesmerize” the brain—in such a way as to bring about some type of physiological change in the viewer. Knowing their purpose, the viewer can then stare at these mosaics and fall into a kind of trance state, which aids and assists in bringing out the benefits of meditation.

While I´m not aware of any mosaic patterns being featured in occult art, there are some parallels. One example is the image below, which was first published in 1659 in the Azoth of the Philosophers by German alchemist Basil Valentine. The image is used by alchemists as a kind of visual guide to the operations of alchemy: 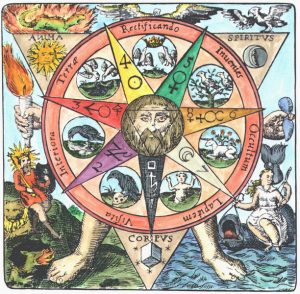 Just like the ancient Mediterranean mosaics shown above, this alchemical image depicts a giant circle with a face in the center. In the occult sciences, this face symbolizes one´s inner divinity, the eternal and immortal principle that informs and animates every human being (and every living thing).

“At the center of this striking drawing is the face of a bearded alchemist at the beginning of the Work. Like looking into a mirror, this is where the adept fixes his or her attention to begin meditation at the center of the mandala…

…the drawing clearly implies that the face of God and the face of the alchemist are the same. Of course, this idea was considered blasphemy to the medieval Church, which explains why this drawing was circulated secretly in so many different forms during the Middle Ages. It was not until the Renaissance, when the idea of the divine nature of man, that the drawing was first published.”

Parallel meditation devices are known in the East. They are called “mandalas” and “yantras.” The power of mandalas has been known among adepts in Eastern cultures for thousands of years—but their connection to Europe´s mosaics has never been recognized by academia.

The word mandala translates to “circle.” Mandala images represent the cosmos and the human being (microcosm / macrocosm) in balance, wholeness, centeredness, and harmony. When concentrated upon, mandalas can bring about a profound inner transformation: 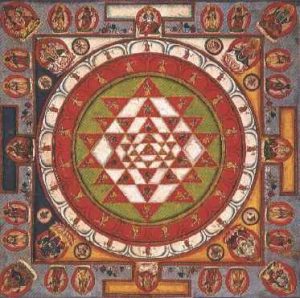 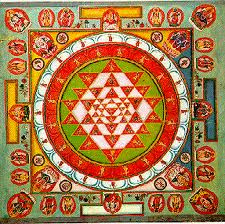 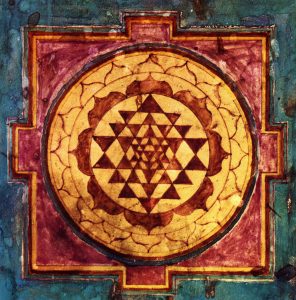 “In various spiritual traditions, mandalas may be employed for focusing attention of practitioners and adepts, as a spiritual guidance tool…as an aid to meditation and trance induction.”

Among the most interesting mandalas are those that depict the hexagram pattern, a well-known symbol made up of twin triangles—one pointing up, the other down—interlocking. These triangles symbolize all the pairs of opposites that constitute physical existence, and they are intertwined; the triangles also symbolize heaven (upward pointing triangle) and earth (downward pointing triangle), showing how the two realms are related and interdependent: 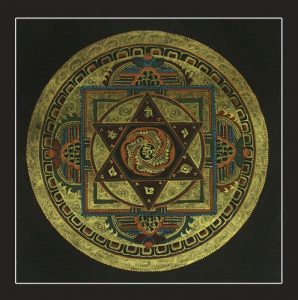 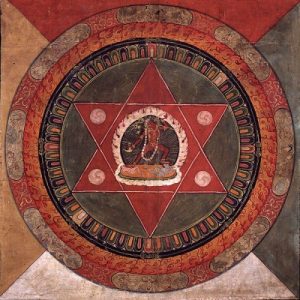 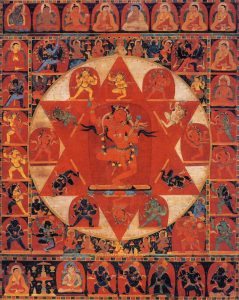 The “balance of duality” symbolism encoded in these eastern mandalas and yantras, and others like them, is designed to help initiates awaken their Third Eye, a vestigial organ described in ancient India´s Hindu religion as the ajna chakra, the sixth of seven major “chakras” or power centers in the human body.

Ancient Hindu tradition teaches that the chakras are aligned in ascending order from the base of the spinal column in the pelvis to the top of the head, forming the seven major regions of the human body. They are connected to each other and to the “thousand-petaled-lotus” at the crown of the cerebrum, which can be opened like a lotus flower to attain higher consciousness. Some ancient Mediterranean mosaics are even shaped like ancient Hindu chakras, giving us further evidence they were designed for the spiritual purpose of raising consciousness: 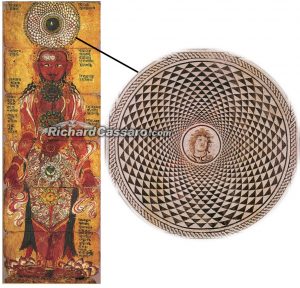 Like their eastern counterparts, ancient Mediterranean mosaics also express deep esoteric symbolism in their pictures, signs, shapes, etc. Today, we classify this symbolism as “esoteric” and “occult.” These symbolic mosaics can be read like a book, providing detailed instructions on how to awaken higher consciousness.

More specifically, mosaic symbolism expresses the so-called “Perennial Philosophy” (i.e., what I call the “Universal Religion of the Golden Age”) found at the inner core of all ancient religions. One of the most basic symbols of this Perennial Philosophy or Universal Religion is the swastika, which has been encoded in the world´s most ancient mosaics: 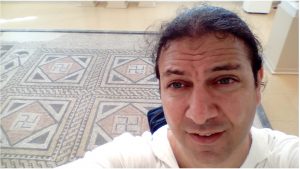 The swastika was a powerful symbol ubiquitously shared by the
world´s first known cultures. Photo of me, Richard Cassaro, in Tarragona, Spain.

The swastika is found in the mosaic artwork of different Mediterranean countries including Spain, Greece, and Italy. Many Victorian scholars believed that this parallel symbol found across wide-ranging cultures is evidence of a common source—Atlantis—but this idea was discarded by post-World War II scholars (who I believe lack the intellectual genius and humility of their predecessors): 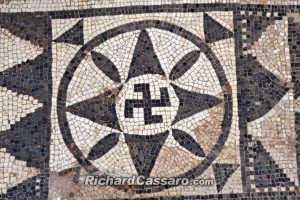 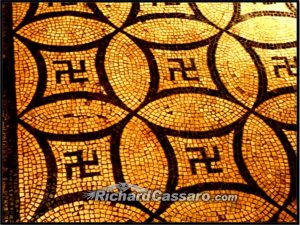 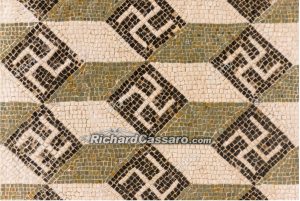 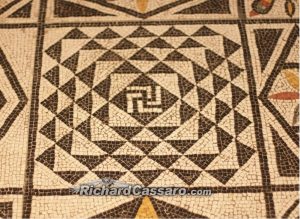 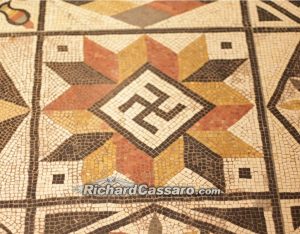 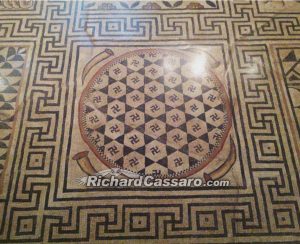 The swastika is a popular ancient and universal symbol for mosaics because the swastika encodes within its symbolism the “balance of duality” formula required to (concentrate on one´s center and) awaken higher consciousness.

Surprisingly, I have yet to come across any authors and/or researchers who have pointed to ancient Mediterranean mosaics as “meditation devices,” and I have not found any academic studies on the subject. While researching this article, I learned that two books on mandala meditation—both of them coloring books—did include a few photos of ancient European mosaics, but with little more than a one-sentence caption; there does not seem to be any seminal literature on the subject. The more noteworthy of these books is Mandalas For Meditation by Ruediger Dahlke, a coloring book that is a meditation workshop rather than an academic study; the author treats the idea that Mediterranean mosaics are meditation devices as a foregone conclusion, rather than a theory, and he presents only one Mediterranean mosaic.

Other esoteric symbols encoded in mosaics include the hexagram, pentagram, flower of life, eight-pointed star, and Taijitu, all of which are occult symbols that in general terms express the concept of finding the eternal and divine nature within: 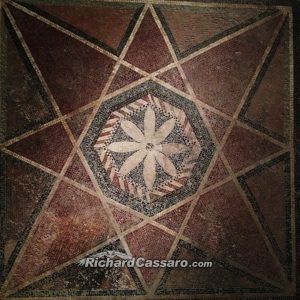 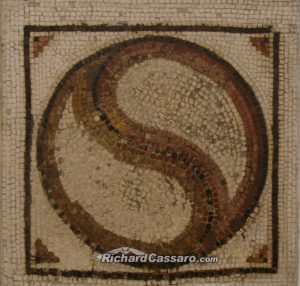 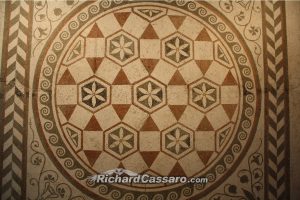 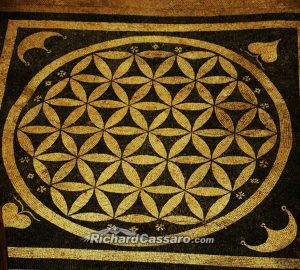 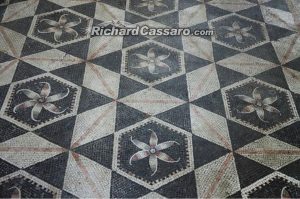 Like their ancient Eastern “mandala” counterparts, ancient Mediterranean mosaics appear to be brilliant meditation tools that can aid and assist with self-reflection and even self-therapy.

For more on my theories on ancient mosaics and my research into their symbolism and meaning, please sign up for my Newsletter. My books, videos and films provide complementary information.