The Dunhuang caves, also called the Mogao Caves or Mogao Grottoes, are a system of temples. There are 492 temples on the 15.5 mile (25 km) stretch southeastward from the oasis of Dunhuang in Gansu province on the edge of China’s Taklamakan Desert. Construction of these shrines began in 366 B.C. Since then, the shrines have been used to store scriptures and artwork. The Buddhist art found within the caves spans 1000 years of history, and contains some of the finest examples of this genre.

In 366 B.C., a Buddhist monk again excavation of the cave based on his vision of a thousand Buddhas. Eventually, more than 1000 temples were created. Buddhist monks retreated to these caves seeking enlightenment. Between the fourth and 14th centuries, Buddhist monks collected scriptures. Pilgrims painted inside the caves. The scriptures and artwork were used as aids to meditation and to teach the illiterate Chinese peasants about Buddhism.

In the early 1900s, a Chinese man named Wang Yuan-lu was the guardian of some temples. He discovered a wall, behind which was a treasure trove of ancient manuscripts dated from 406 to 1002 B.C. This material included Chinese and Tibetan scrolls; paintings on silk, paper, and hemp; and other Buddhist figurines and paraphernalia. They are also workbooks, administrative documents, anthologies, Confucian and Taoist works, and even calligraphic exercises.

By 1910, European expeditions arrived to learn more about these mysterious caves. Britain, India, France, Japan, and even Russia sent explorers to learn more. Chinese manuscripts were sent to Beijing. The Tibetan manuscripts remained. Wang continues his work as caretaker. His temple refurbishment project is funded by donations from nearby towns and from previous expeditions. 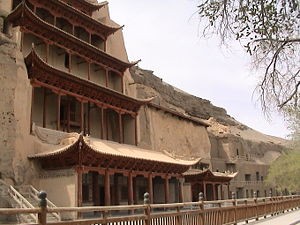