The gods of old were giants. During the first winter, a powerful giant arrived, made of hoar frost. He melted when fire came. His huge body formed the world. The sea was created from his blood; the mountains arose from his bones; his skull created the sky, and his hair made the forests.

The gods live at the center of the earth on hills that rise as high as the mountains. Below them is the land of the Underworld, the place where the dead and all their secrets are kept. 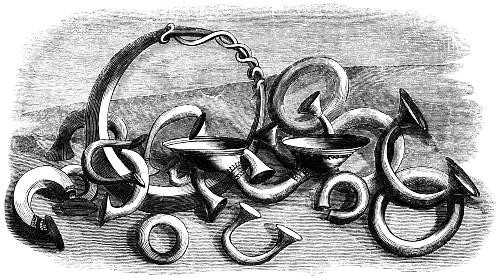 “Ring-money, peculiar to the Celtic nations, undoubtedly existed in Ireland previous to the domination of the Romans in Britain. Although Cæsar says that the ancient Britons had no coined money, there is sufficient probability that they had their metal plates for purposes of currency, such being occasionally found in English barrows.
The Ring-money has been found in great quantities in Ireland, of bronze, of silver, and of gold. The rings vary in weight; but they are all exact multiples of a standard unit, showing that a uniform principle regulated their size, and that this was determined by their use as current coin.” Charles Knight, 1845.
Courtesy Wikipedia.