The creation myth of the Babylonians is recorded in the Enuma Elish (“Epic of Creation”). This dates back almost 4000 years, and is recorded in poetry rather than prose.

The ocean goddess Tiamat is plotting to attack divine beings. The god Marduk (also called Assur in Assyrian versions) is created to defend them. He agrees to help them, but only if they proclaim him their supreme leader even after the threat has passed. The gods agree to these terms, and Marduk destroys Tiamat. He tears her corpse into two, using the halves to create the heavens and the earth. He then organizes the planets and stars, creating a calendar. Marduk also regulates the movements of the sun and moon, and the weather. Finally, he creates Babylon, the earthly counterpart to the heavenly home of the gods. Marduk uses the blood of Tiamat’s murdered husband, Kingu, to create man.

The Enuma Elish is recorded on seven clay tablets, each of which contains 115 to 170 lines of text. Although most of Tablet V is still missing, the text is still quite complete. In fact, a duplicate copy of Tablet V was discovered in Turkey.

There are several versions of the Enuma Elish, and copies have been found in both Syria and Babylon. The earliest version, found in the library of Ashurbanipal, dates to the seventh century B.C. However, it is likely that the story originated in the 18th century B.C., at a time when Marduk was prominent.

There are some interesting parallels between this text and the account of creation in Genesis of the New Testament. For example, the Babylonian God Marduk completed his work within the timeframe of six stone tablets. The seventh stone, the final one of the series, praised the deity for his handiwork and greatness. Some believe that the seven days of creation (found in the Bible) is linked to the seven stone tablets of the Babylonians. 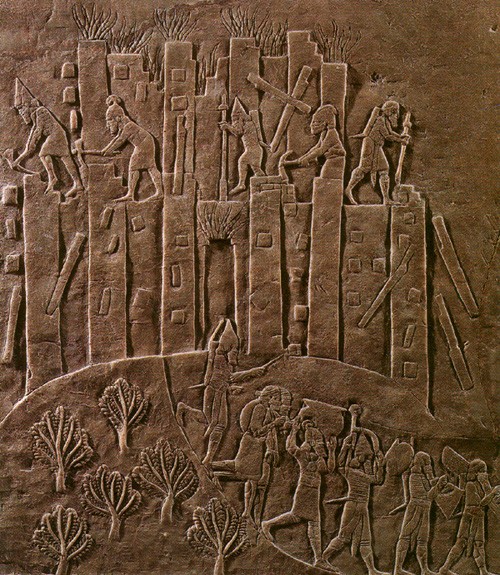 The destruction of Susa of Elam by Ashurbanipal, 647 BC, relief. This tablet, unearthed in 1854 by Henry Austin Layard in Nineveh, reveals Ashurbanipal as an avenger seeking retribution for the humiliations the non-Semitic Elamite Empire had inflicted on the Semitic (thus unrelated) Mesopotamians over the centuries. Says Ashurbanipal:
“Susa, the great holy city, abode of their Gods, seat of their mysteries, I conquered. I entered its palaces, I opened their treasuries where silver and gold, goods and wealth were amassed…the treasures of Sumer, Akkad, and Babylon that the ancient kings of Elam had looted and carried away. I destroyed the ziggurat of Susa. I smashed its shining copper horns. I reduced the temples of Elam to naught; their goods and goddesses I scattered to the winds. The tombs of their ancient and recent kings I devastated, I exposed to the sun, and I carried away their bones toward the land of Ashur. I devastated the provinces of Elam and on their lands I sowed salt.” Courtesy Wikipedia.