Coral Castle is a stone building near Homestead, Florida. Its builder, Edward Leedskalnin, left Latvia after being jilted by his fiancée the day before their wedding. As he left, he developed terminal tuberculosis which miraculously healed, for which he praised the power of magnets.

Still hoping to impress his ex-fiancée, he worked on Coral Castle for over 28 years. He began building Rock Gate Part in Florida City around 1923. At the time, Florida City was an isolated community. In 1936, Leedskalnin moved himself and his castle 10 miles north to its present position in Homestead, where he continued to work on it until 1951.

The enduring mystery of the Castle is how one man could carve and move the massive stones used. The stones are made of Oolite, a sedimentary rock commonly found in southern Florida. They are carefully placed one on top of the other, with no mortar to seal them. The craftsmanship is perfect – connecting stones around the perimeter wall are uniform in height, and despite the lack of mortar, the stones sit perfectly against one another. Even the devastating 1992 Hurricane Andrew failed to destroy the castle.

Leedskalnin’s living quarters were in a two-story castle tower whose walls were made up 8 foot high pieces of stone. There was an accurate sundial, a water well, the obelisk, a Polaris telescope, and numerous pieces of furniture, all carved in stone. Most objects are made from a single piece of stone, carved using crude tools.

The largest stone at Coral Tassel weighs 30 tons, more than three times heavier than the largest stone in the great pyramid of Giza. Yet it remains a mystery how the builder managed to carve and move such huge stones without heavy equipment.

The most famous structure of Lee Coral Castle is a revolving gate made of a nine-ton stone. Despite its massive weight, the gate was so well-balanced that even a child can open it. In 1986, the gate stopped working. It took six men and a 50 ton crane to remove the gate. Engineers discovered that Leedskalnin had drilled a hole through the 8 foot tall rock (using no electric tools), then inserted a metal shaft. An old truck bearing under the rock allowed to move. Once the truck bearing rusted out, the gate was seized closed. It was repaired in 1986, but failed again in 2005 and has not yet been repaired.

Leedskalnin himself kept his work secret. He worked alone, accepting help from no one. Visitors would ask him how he managed to move such massive stones. In reply, he would smile enigmatically and tell them that he understood the laws of weight and leverage, or had discovered the secrets of the pyramids.

There are photos of him using traditional block and tackle. However, it is doubtful that he used pulleys, chains, and block and tackle for many of the stones. The chains he used could support a maximum of 3.5 tons, while his stones were often much heavier. The tripods and pulleys he used were similarly unsuited to the task of moving larger stones. Leedskalnin never shared the secret, and it remains a mystery to this day. 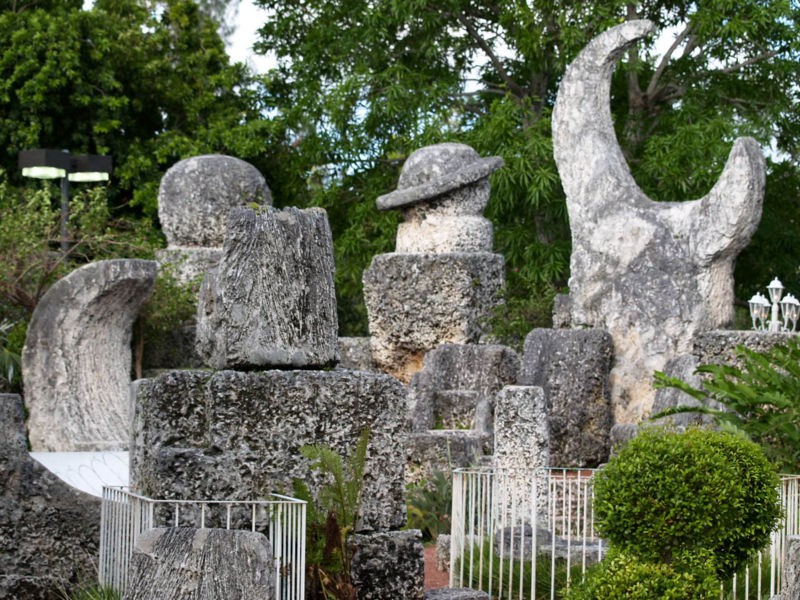