The Clovis people were prehistoric Native Americans who first appeared approximately 13,000 years ago. They are named for artifacts that have been found near Clovis, New Mexico. Since that initial discovery, Clovis sites have been found through the United States, Mexico, and Central America.

The Clovis people may have been the first human inhabitants in the New World, ancestors to all indigenous cultures of the Americans. Recent findings at Monte Verde and the Meadowcroft Rockshelter may be older, and opinions are divided.

The hallmark of the Clovis toolkit was the Clovis point, a distinctive spear point made of stone. The shape of the Clovis point may have allowed it to be mounted on a spear so it would break off on impact. These spear points have been found associated with mammoth remains, indicating that the Clovis people were skilled hunters. They also used over 125 species of other plants and animals.

The disappearance of the mammoth may have been caused by overhunting, though this theory is still controversial. Most likely, the disappearance was caused by a combination of events – human predation, disease, climate change, and pressure from newly arrived animals have all been proposed as possible causes.

Archaeologists are divided as to whether an older culture existed in North and South America. Certain artifacts have been found which seem to be older then the Clovis artifacts, although claims are disputed.

The origin of the Clovis people remains a mystery. Until recently, the favorite theory stated that the Clovis people crossed the Bering Strait from Siberia to Alaska during the Ice Age, when sea levels were low. From there, they tracked southward east of the Rocky Mountains. However, radio carbon dating place Clovis remains in a small time window which would not have allowed their culture to spread across the continents.

An alternative theory suggests that Native Americans diverged genetically from Siberians up to 20,000 years ago. Perhaps the Pacific Coast remained free of ice, allowing people to use this route into the continental interior. There is little evidence for this hypothesis; however, archaeological evidence shows pockets of flora and fun persisting throughout the Ice Age of the Pleistocene era. Supporters believe that this points to an abundant food supply, not to mention an open migration route along the coastline. 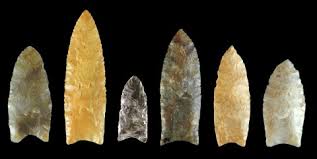 Examples of Clovis and other Paleoindian point forms. The second is a Cumberland point and the fourth is a Barnes point, important markers of later archaeological cultures in the Northeastern part of North America. Courtesy Wikipedia.