This ancient technique of divination uses the lines of the hands and palm, shape of the fingers, and bumps and mounds on the palm. Through careful study, one can analyze a person’s character and predict their future.

Palmistry became very popular in medieval times. It was widely believed that the lines and bumps of the hand were placed there by occult forces. Each feature of the hand corresponded to astrological symbols which indicated general health, intellect, longevity, and the ability to attract love and money.

Ancient Tuscan legend describes how the knowledge of palmistry came to mankind. Aradia, the Queen of the Witches, came to earth and introduced witchcraft to humans. Because of her, we are able to “know the secret of the hands” through palmistry.

Palmistry is often divided into one of two categories. Chiromancy seeks to define information on the past, present, and future. Chirognomy, meanwhile, is used to reveal a person’s character, personality, and potential.

Archaeological studies suggest that palmistry originated around 3000 B.C. in either India or China. Nomadic gypsies introduced the practice to Europe in the 15th century. The church later banned the practice, although it continued, albeit hidden. Over time, palmistry often became just a parlor trick.

Modern practitioners of palmistry seek to understand the character, inclinations, and psychology of the person being read. Palmistry is rarely used to divine or predict the future. 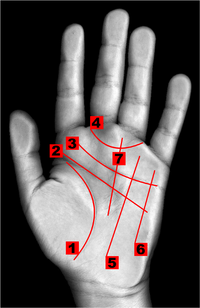