A black hole is an area in space where the gravitational field is so strong that it sucks surrounding objects into itself. Because it absorbs everything from matter to light, and because the pull of a black hole is so powerful, there is no escape. Even light cannot find its way out.

Although it appears invisible, we can deduce the appearance of a black hole by watching matter get sucked in. An accretion disk forms as the matter moves closer to the black hole. Like water down a drain, matter spirals down and into a black hole.

Obtaining pictures of black holes is a challenge. Often, the pictures are computer simulations. However, we know that black holes exist. Einstein’s theory of general relativity, developed in 1916, explains that when a large mass is compressed into a very small space (as would happen, for example, when a star collapses). Radiation and matter fall inward toward the centre, pulled by the incredible gravitational field surrounding the black hole.

What happens once you enter a black hole is a matter of some speculation. Assuming that you had a space ship to take you there, you would likely be sucked in. anyone observing your progress would believe that your descent was slowing down. In fact, since light is also being sucked into the black hole (making photons move more slowly), your descent would only appear to be slowing to outside observers. You would notice no change.

From your position on the ship, you will cross the event horizon, reaching the centre of the black hole (also known as singularity). After crossing the event horizon, you will disappear, at least from the perspective of your distant viewers. Approaching the singularity, your ship and everything inside will begin to elongate. Nearer to the singularity, objects will shift to red before becoming invisible. The force of the gravitational field will stretch and tear at the ship in a process called spaghettification.

With study, scientists have evidence for two types of black hole. Stellar mass black holes have the same mass as a typical star, over 400 times that of our own Sun. Supermassive black holes, on the other hand, are much larger, with a mass of 1% of a normal galaxy. 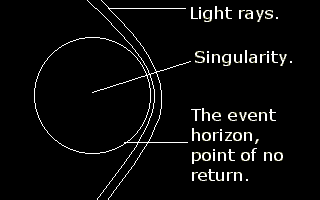