Australia is both a continent and a country. Located in the Southern hemisphere, it was “discovered” by European explorers in the early 17th Century. Indigenous Australians, now known as Aborigines, had lived here for 42,000 to 48,000 years before the Europeans showed their white faces. Clearly, this land was already discovered.

Australia is home to unique species not found anywhere else. Its geographic isolation means that over 80% of mammals, flowering plants, and in-shore fish exist only in Australia – creatures like the kangaroo, koala, and wombat. Over 45% of bird species exist nowhere else, including the kookaburra and the emu. Dingos, that popular symbol of Australia, arrived around 3000 years ago through Aboriginal trade with Austronesian peoples.

The first Australians arrived from southeast Asia, arriving via land bridges and (short) boat trips. Aboriginal hunter-gatherers had (and still have) a complex oral tradition, and their feats of memory continue to amaze us. They treat the land with reverence, taking care not to abuse the Earth.

Aboriginal religion and culture centre around the Dreamtime. Through the Dreamtime, people will understand the origins of the Aborigines and maintains their culture. The land and all the creatures play a vital part in their religious traditions. Incredibly, many of their traditional stories, passed orally for hundreds of generations, are now being validated by scientists. Aboriginal accounts of geological changes like volcanic activity and sea level changes are now being examined from an Aboriginal perspective.

The Dreamtime can be a complex idea with two possible meanings. First, the aboriginal creation time is known as the Dreaming. “Dreaming”, however, can also refer to the spiritual beliefs of a certain person or group – who may have Shark Dreaming, Kangaroo Dreaming, or any other Dreaming.

Many millennia ago, “Ancestor Spirits” arrived on the Earth from the heavens. These spirits took many forms, including human. They gave form to the plants and animals, and created relationships between individuals or groups of all species. Many physical locations have stories of Ancestor Spirits who created the hills and rivers in the surrounding areas.

There are many different aboriginal tribes, and legends vary between tribes. Most Dreamtime legends surround the Giant Snake or Giant Dog. Each legend is a colourful and unique explanation of the world according to the Aborigines.

Uluru rock art shows stories of the Dreamtime. There are layers of paint, one atop the other – paintings are renewed regularly. Some paintings are thousands of years old. This photo courtesy Wikipedia. 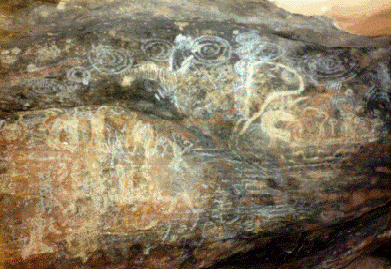