A powerful ancient “message” is being communicated to us—and hidden from us by the Elite—by the Sun & Moon in our sky. This message or “code” was crafted billions of years ago by someone or something far more powerful and more intelligent than ourselves. Today’s scholars, archeologists and scientists have failed to recognize, let alone crack, the code of the Sun & Moon. But ancient priests and priestesses knew it well. Sadly, two thousand years ago organized religions like Christianity outlawed the Sun & Moon’s wisdom. Luckily, Secret Societies like the Freemasons quickly arose to safeguard it. Using Masonic symbols as our guide, we’ll uncover the lost secret of the Sun & Moon and decode their life-changing spiritual message. 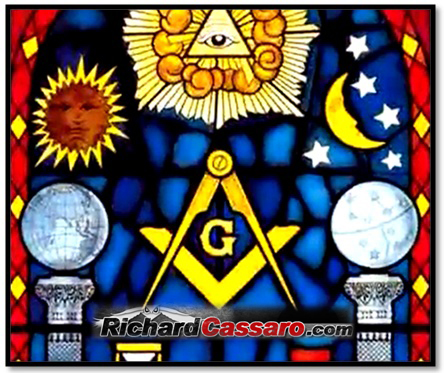 We see the Sun & Moon in our sky every day. The “sun rules the day and the moon governs the night“―to use a term from a Masonic initiation ceremony.

But did you know these twin heavenly bodies are transmitting a powerful and profound message to us? A message crafted by some cosmic and intelligent life form? A message about our universe, our world, and ultimately ourselves?

Sounds crazy. But it’s not.

Unfortunately, about 2,000 years ago this ancient knowledge was banned and outlawed by the Catholic Church and other organized religions. Luckily, the wisdom was preserved for posterity through the formation of Secret Societies, like the Freemasons.

(NOTE: Contrary to popular belief, Secret Societies were not “founded” to create a twisted “New World Order”; they were “founded” to safeguard potent ancient wisdom. However, most have been “hijacked” in the last two centuries, and have now degenerated.)

Today, the wisdom of the Sun & Moon is purposely being hidden from us―or, rather, forbidden from our view―by the Elite, who fear empowering the masses with authentic spiritual knowledge.

However, we can rediscover the ancient lost knowledge for ourselves, simply by observation. To make things easier to follow, we’ll use Masonic symbolism as our guide.space

The Sun & Moon In Freemasonry

In the great system of Freemasonry, the Sun & Moon hold pinnacle importance in rituals and ceremonies. Note the positions of the Sun & Moon in the Masonic art and artifacts below: 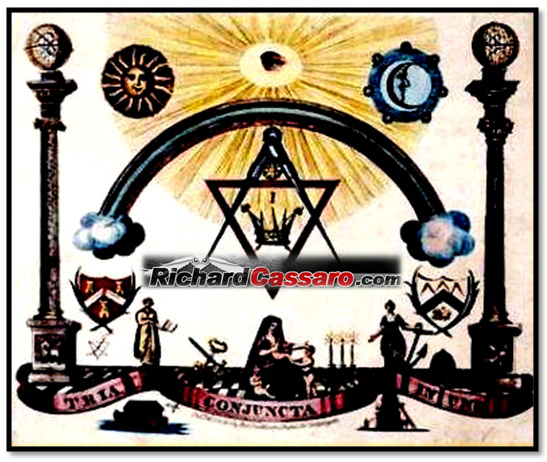 Masonic Tracing Board depicting the Sun on the
right-hand side and the Moon on the left-hand side, facing us. 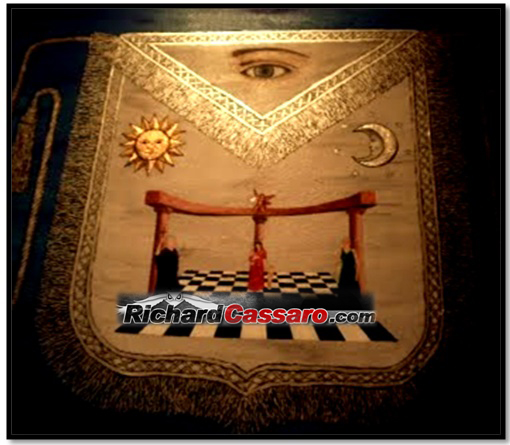 Masonic Apron worn during rituals and ceremonies, depicting the
Sun on the right-hand side and moon on the left, facing us. 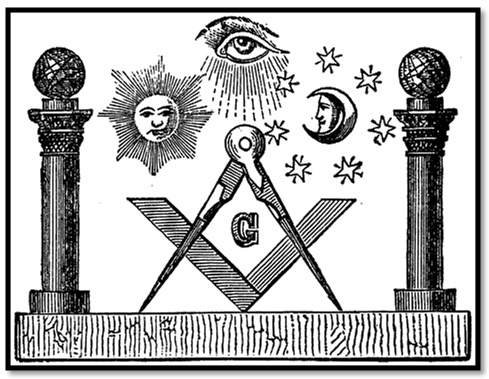 Masonic drawings usually depict the sun at right and moon
at left (facing us) flanking a luminous single Eye symbol.

It is very interesting how the Sun is always depicted on the right-hand side and the Moon on the left, facing the viewer. This is important. It’s our first clue to discovering the deeper meaning behind these twin heavenly bodies.

The Sun & Moon In Renaissance Artwork

Renaissance artists, many of whom were initiates of the great Secret Societies and thus familiar with the deeper meaning of the Sun & Moon, created artwork that esoterically conveys the Sun on the right and Moon on the left: 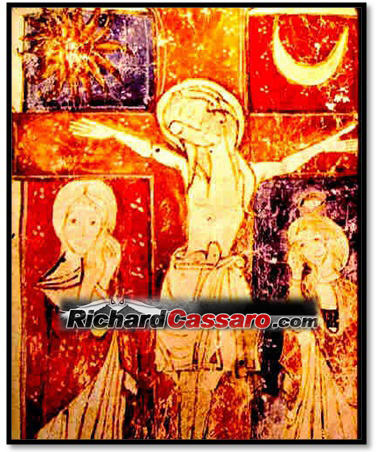 Sun on right and moon on left, facing us.
Romanesque Crucifix.

Specifically, these artists associated the Sun with the right hand of man (in this case Jesus) and the Moon with the left hand of man: 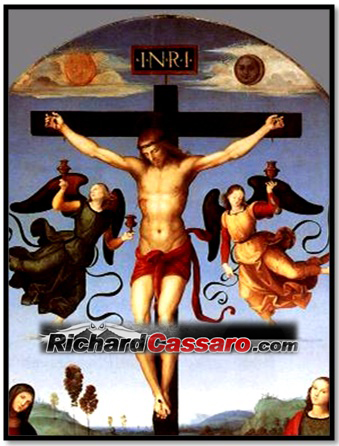 This Renaissance masterpiece, “Crucifixion” by Raphael (1483-1520 AD),
shows the Sun on the right hand of Jesus and the Moon on his left.

This was taken a step further by one of the most famous artists in history, Michelangelo, who depicted the Sun at the right hand of God and the moon at the left hand of God in one of the world’s most beloved artistic masterpieces, The Sistine Chapel. 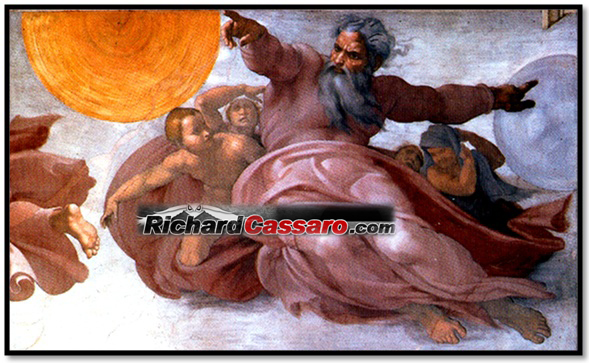 Note also how Michelangelo depicts the sun “illuminating” the right “half” of the Lord’s body, while the Moon has rendered God’s left “half” in shadow. Another important clue.

The Sun & Moon As Male & Female 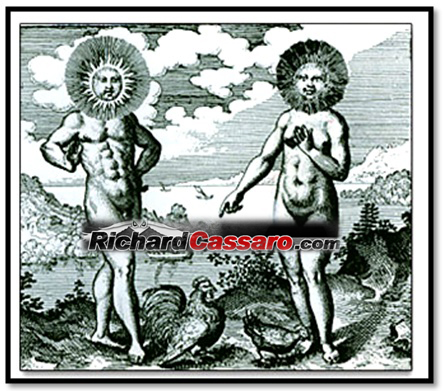 Male Sun on right and Female Moon on left, facing us. This
engraving is from Michael Maier’s alchemical text, Atalanta
fugiens (1618). It shows the Sun & Moon as the twin
complementary principles of the alchemical work. 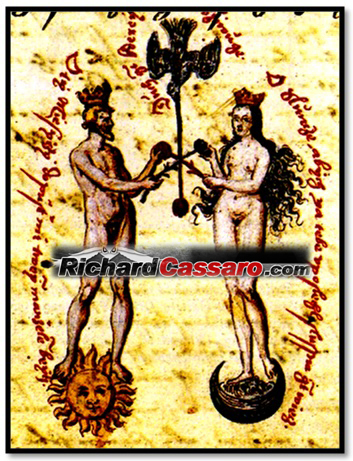 Male standing on Sun at right side, facing us, and Female standing
on Moon at left. Medieval esoteric portrait.

St. Francis of Assisi, an initiate of the ancient wisdom, wrote a prayer dedicated to “Brother Sun and Sister Moon.” Indigenous cultures all around the world associate(d) the sun with male and the moon with female. In West Africa, the Fon tribe tell of the male Sun god and his twin sister, the Moon goddess. 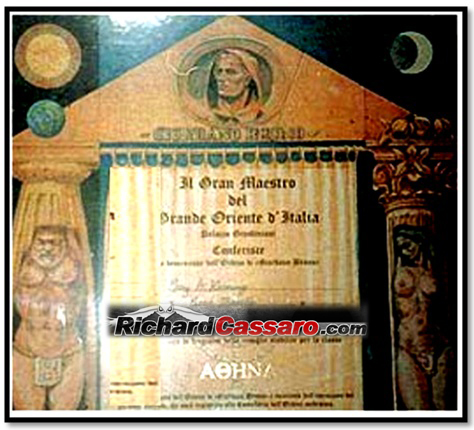 The Sun & Moon As Jachin & Boaz 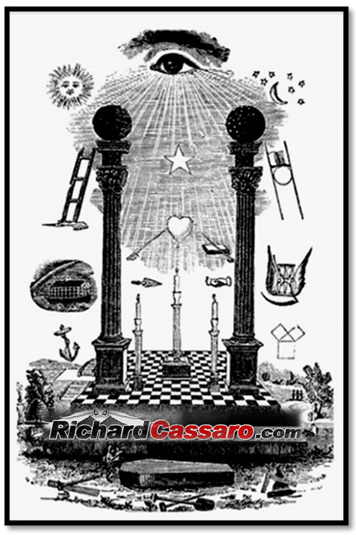 The “Masters Carpet,” from The Masonic Monitor in 1820,
includes Freemasonry’s key symbols: the Sun, Moon, and Mystical Eye.

Why is there such strong emphasis on the Sun & Moon in Freemasonry?

Is there a deeper significance and esoteric symbolism regarding the Sun & Moon that the vast majority of the world’s population does not understand?

What is the great “secret” of the Sun & Moon?

Their secret is this: The Sun & Moon symbolize what is known in occult circles as the “pairs of opposites” teaching―a lost body of knowledge that was once known to, and once shared by, the world’s most ancient and indigenous cultures.

Everything here in the visible universe (in which we live and move and have our physical existence) has an equal “opposite”―just like the twin Jachin & Boaz pillars in Freemasonry, which are of equal size and shape. 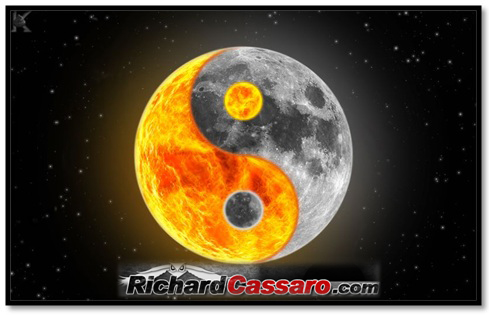 But how exactly do the Sun & Moon convey “opposites”?

The answer can be found in the following list of balanced dualities that are not only symbolized by, but are also caused by, the Sun & Moon.

First, notice the “pairs of opposites” that you read. Then, notice how these opposites are “inherent in” (i.e., not just “symbolized by”) the Sun & Moon:

By this chain of associations, the Sun & Moon engender and denote all the “pairs of opposites” in the universe!

If you aren’t blown away by this, then you’ve simply missed it. Review it again slowly. Keep thinking about it until the power of this chain of associations hits you.

If you are blown away, then get ready, this is just the beginning!

Next, think about this: Both heavenly bodies show their faces for average 12 out of 24 hours daily. That’s exactly half each! This fits in perfectly with the “opposites” being “equal” and “opposing” yet complementary and balancing!

The idea that both the Sun & Moon show their faces on average 12 hours each out of a 24 hour day (half each) is more than “just a bit odd.” This is an impossible coincidence!

Amazingly, there are even more striking parallels. For example, when viewed from earth, the sun and moon appear exactly the same size in our sky—as if they were perfect opposites!

The sun’s diameter is 400 times that of the moon, but, due to the moon’s close proximity, both orbs appear the same size in the sky. This is exceedingly unlikely, and astronomers of all ages have marveled at this strikingly odd coincidence. 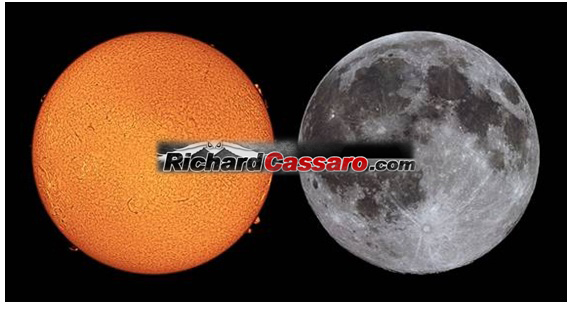 The sun and full moon appear to be the same size
when viewed from earth―no way a coincidence!

Think about this extraordinary circumstance for a moment. Not only do the Sun & Moon engender and denote all the “pairs of opposites” in the physical universe, but they appear to us to be exactly the same size in our sky!space

Did A Great Architect Design This?

Can all this be coincidence? Most definitely not. There appears rather to be an extraordinary intellect behind it. That is to say, a powerful and vastly ancient intelligence, one with enough power and spiritual strength to move heavenly orbs (orbs like the Sun & Moon) did this on purpose.

The hand of some great “Architect” of the Universe is at work here―an Architect whose aim is to teach humankind all about “duality” and the “pairs of opposites.” Interestingly, the Freemasons have an expression called “The Great Architect of the Universe.”

Were these Freemasons onto something that the folks at NASA and SETI are still years away from understanding?

The ancients certainly didn’t think these circumstances surrounding the Sun & Moon in our sky are coincidence. For them it was a message from beyond the realm of our understanding; a greater power or deeper mind with vast intelligence lies behind this. This higher intelligence actually conceived, created, and placed the Sun & Moon in our sky this way, with the goal being to teach man the important concept of “duality” and “pairs of opposites” in balance.

This wisdom regarding duality and the opposites can help us understand more about who we are, where we came from and where we’re going in many different ways.