Rumors of a connection linking Mormonism to Freemasonry have swirled for more than a century.

Articles and even entire books have been written on the subject.

However, the most powerful and mysterious connection between these two movements has not yet been recognized.

This connection is the following:

A massive—Masonic—Triptych graces the façade of the Salt Lake Temple, the best-known temple of The Church of Jesus Christ of Latter-day Saints:

If you don’t follow this blog regularly, here’s a brief overview of the Triptych…

I’m writing a book called Written In Stone describing my discovery of the “Triptych” and the ancient wisdom it enshrines.

The Triptych graces the facades of ancient temples all over the world (see www.DeeperTruth.com).

This is because ancient cultures all knew the Triptych symbolizes a powerful and highly spiritual Sacred Science teaching, which they all once shared (exactly how is immaterial).

Even more interesting, modern Secret Societies, like the Freemasons, seem to have been very well-versed not only with Triptych design but also with the ancient Sacred Science wisdom it symbolizes.

As evidence of this, the (operative) Freemasons built the Triptych design into the portals of Gothic cathedrals: 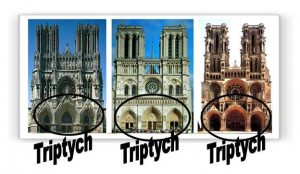 So how, then, did the Triptych make its way onto the façade of the famous Salt Lake Temple?