This post is a continuation of my previous post of March 22nd, titled: Salt Lake Temple’s Mysterious “TRIPTYCH” Facade—The Most Powerful Masonic/Mormon Link Ever Uncovered

The question I posed is…

How did the Triptych find its way onto the Salt Lake Temple?

The answer is simple: The founder of the Mormon Religion, Joseph Smith, Jr., was a (speculative) Freemason. In fact, it’s well-known that his entire family was active in Freemasonry as early as 1816.

Now, generally speaking, there are two schools of thought regarding the Mormon Religion.

Mormons believe every word of the LDS church; scholars, on the other hand, ignore the entire history of the Mormon movement.

I believe the discovery of the Triptych on the Salt Lake Temple is provocative and powerful enough to open up a third school, a third point of view.

This third camp looks at the entire Mormon movement from a totally new perspective—from the angle of Joseph Smith’s involvement in Freemasonry, and from the point of view that Joseph Smith may have understood the “Secret” of the Triptych architectural pattern (the “Secret” of the ancient Sacred Science of true Freemasonry) as evidenced by the Triptych design on the Salt Lake Temple (see www.DeeperTruth.com): 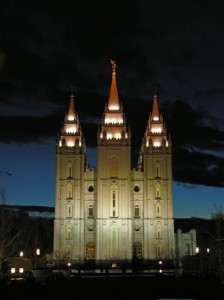 Today, the impact of Freemasonry in Mormon Church doctrine remains the subject of intense debate, and the Church of Jesus Christ of Latter-day Saints has a longstanding policy of maintaining no official position on Freemasonry.

However, many researchers have uncovered profound parallels and links between the two movements in practice, structure, and symbolism, which go back to the church’s origins.

(One example is that many features of the church’s temple endowment ceremony as established by Smith parallel rituals and ceremonies practiced in Freemasonry.)

In the early 1800s, when the Mormon Church was headquartered in Nauvoo, Illinois, Smith and several of his followers—including his first four successors as church president—were already Freemasons.

When the church relocated to Utah in the 1840s after Smith’s death, there was even talk of forming a “Mormon Grand Lodge.” (This was ultimately rejected by church President Brigham Young.)

In my upcoming book, Written In Stone (www.DeeperTruth.com), I provide more parallels and more information on this emerging and mysterious Mormonism / Masonry connection.

I will discuss more in future blog posts, and I plan to visit and videotape Masonic architectural elements of the Triptych on Salt Lake Temple.

If this subject interests you, make sure to download my FREE PDF Report titled Breaking The Cathedral Code: Freemasonry’s Triptych Secret Revealed (by visiting www.DeeperTruth.com)