The picture below is of a pyramid in Egypt, and it captures beautifully the magic and mystery of the ancient world. The picture perfectly illustrates an almost paradoxical truth about the pyramids: namely, that the stones are weathered and ancient, confirming their age, but the construction and straightness of the pyramid’s slope is almost futuristic in its perfection. 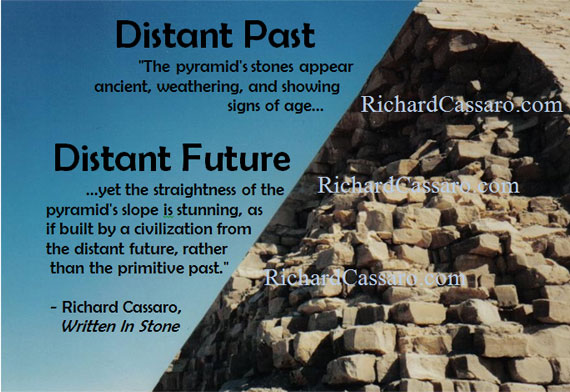 Above: On the one hand the stones look ancient, archaic, and showing signs of age. On the other, the pyramid’s straight line underscores a wisdom and power far in advance than anything we have at present.

In 1996, while living in Egypt, I was studying the pyramids when it occurred to me that the straightness of the slope of the pyramid that you see in the picture above was amazing.

How can this be? After thousands of years?

The moment I took that photograph was a turning point in my studies; it was the evidence that made me certain that the ancients were far superior to modern civilizations in their abilities, skills, wisdom, and understanding. I have failed to understand how the Egyptians and other ancient cultures, such as the Mayans, are now thought of as primitive: civilizations that are devoid of advanced science, relevant long ago but no longer useful to modern societies. The opposite, in fact, is clear to me: the evidence of the pyramids suggests to me that these ancient civilizations were, in the most important respects, far more advanced than ourselves.

This impossible structure helped me to study the philosophies and spiritual traditions of the ancients from a different perspective, a perspective that approached them as cultures with wisdom to give instead of cultures who have nothing to offer. Through this new lens, I came to realize a guiding principle behind these ancient cultures is a doctrine of immortality, the idea that human beings are of a divine origin and capable of recognizing our true eternal powers through our own efforts. The focus of my work since then has been to recover this common idea from the ancient cultures and return their serious study to academia. 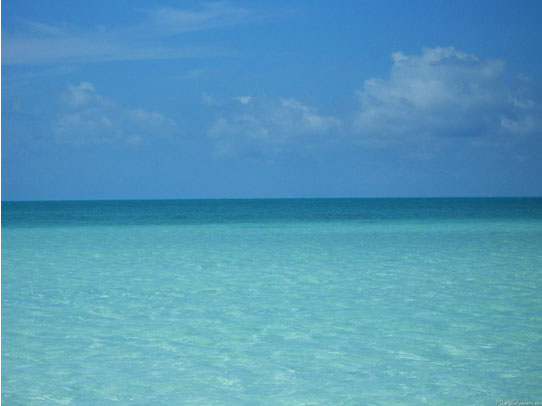 Above: The ocean’s horizon is probably the straightest line in Nature (or, rather,
it appears to be to the human eye). Compare its line to the pyramid’s slope.

The thorny problem that faces modern Egyptology is this: they have lost touch with the mysteries of Egypt, unwilling to accept the fact that the true Egypt does not make much logical sense with the currently established academic model. Unfortunately, they pretend that it does in order to avoid losing face instead of looking into the ancient wisdom that exists in the culture itself.

If you are interested in studying mysteries, Egypt, and other phenomena of this sort, don’t be dismayed: current academic scholars have thus far shown a distinct distaste of the study of these alternative mysteries, and it is only through our own efforts that we shall change this outlook.

Stone is not flesh and blood; the Gothic cathedrals, delicate though they might be, have lasted already a thousand years upon their carefully balanced stones.

With this in mind, one thousand years is not much time at all for something as massive and high—as an Egyptian pyramid. Indeed, the construction of the pyramids is so remarkable that the apex of the pyramid of Khafre looks almost new (the damage done was done by man; Egyptians used to strip stones from the pyramids to build homes in Cairo):

The pyramids are dated to about five thousand years ago, and as we can see in the casing stones above that time has done virtually no harm to the pyramids. It is not an unreasonable assumption that ten thousand years could pass with little harm done as well; depending on many other factors, it’s even possible the pyramids could endure well over one hundred thousand years.

Where the stones are exposed and not protected by the outer casing, some weathering has unfortunately occurred. Areas with the casing stones, however, have protected the pyramid incredibly well; stones thus protected seem to have little to no wear.

Yes, I have no doubt, the pyramids of Egypt were designed to last for millions of years. The ancient Arabian proverb “All things fear time, but time fears the pyramids” is no exaggeration.

Learn about it. Live it. Feel it. Wake up to it. Earth is a very strange place, and Egypt is even more strange.

“I am Horus, and I traverse millions of years.”

—Egyptian Book of the Dead

I shall have more to say about this in the future.