Here’s a final follow-up to my last two blog posts.

First, please review the mosque photos in my two prior posts.

Note the powerful and undeniable THREE-IN-ONE architecture on their facades.

Here is an example:

See how the dome and doorway in the center is larger than the two flanking?

I call this THREE-IN-ONE architecture a “Triptych.”

These mosques clearly depict the same Triptych architecture that European Freemasons designed into the facades of Europe’s Gothic cathedrals. 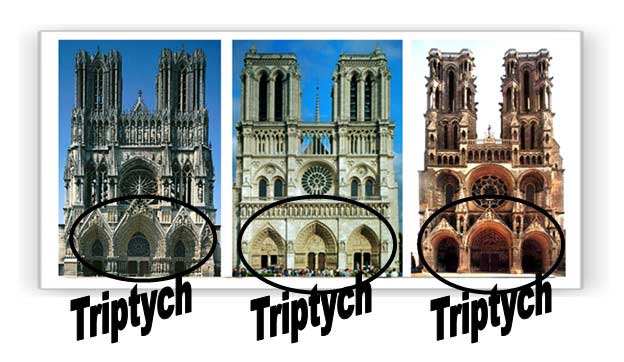 My new book, Written In Stone, reveals how operative Freemasons purposely encoded Triptychs into cathedral architecture to secretly symbolize a powerful and ancient “Sacred Science of Three” they inherited from Antiquity. (Visit www.DeeperTruth.com).

So, with this in mind, the discovery of Triptychs on mosques indicates something very interesting:

After my previous post went live, I received a few emails from readers who identified themselves as Freemasons, questioning my conclusion that Freemasonry made its way into Arabia.

It’s a great question with a simple answer.

Keep in mind that back in the 1800s when Mackey was writing, the word “Mohammedan” meant “Muslims”:

“Nearly all of the old Mohammedan buildings in India, such as tombs, mosques, etc., are marked with Masonic symbols, and many of these structures, still perfect, were built in the time of the Mogul Emperor Akbar, who died in 1605. Thus Masonry must have been introduced into India from Middle Asia by the Mohammedans hundreds of years ago.”—Albert Mackey

Mackey clearly believed that Masonry was “introduced into India” by Muslims “hundreds of years ago.”

Mackey also gives us an important clue as to the possible source of Muslim Masonic architecture—the Mogul Emperor Akbar.

Now, rather than making you read a long, drawn-out explanation of history, I’d prefer to ask you to conduct your own study into the so-called “Mogul” Empire, also spelled “Mughal” (1526–1858).

Study its culture, analyze its art and architecture, and see if you can identify the Moguls as a Triptych-building people, as possessors of the Sacred Science from Antiquity.

(To understand what I mean by “Sacred Science,” visit www.DeeperTruth.com).

As you study the Moguls, I think you’ll see them as a family lineage of builders in stone—in a word, “Freemasons”—who were initiates of Triptych / Sacred Science wisdom.

That is to say, the Moguls appear to have been authentic Freemasons who knew the truth behind the ancient Triptych / Sacred Science.

And they knowingly replicated this Triptych / Sacred Science wisdom in the architecture they designed and constructed.

Let me leave you with one wonderful example, to get you started.

The Mogul Emperor Akbar (who, as Mackey tells us in the quote above, died in 1605) was a close relative to a man named Shah Jahan.

Now, the name “Shah Jahan” means nothing to you, right? That is, until you realize he was the builder of the great Taj Mahal.

With its three giant domes arranged in an ominous Triptych design, the Taj Mahal forms one of the most mysterious and incredible Triptychs on earth: 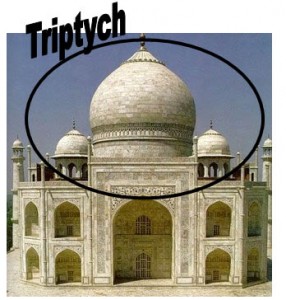 Flanking the Taj Mahal are a pair of mosques, both of which have three massive Triptych domes, as well as a clear Triptych portal entryway: 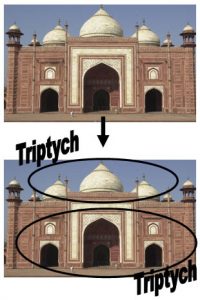 This is clear evidence that the Triptych was known to Arabic peoples, and was encoded into mosque architecture.

Amazingly, the two mosques flanking the Taj Mahal actually form a Triptych, along with it.

The two mosques are precise mirror images of each other.

Finally, here’s a snippet of text from a book called Freemasonry in the Eastern Hemisphere by Ray V. Denslow.

Denslow was master of Trenton Lodge No. 131, Missouri, and Grand Master of the Grand Lodge of Missouri in 1931:

“Freemasonry in India is no new venture. That there were societies of operative Masons there long before the British occupation is evident by the signs and symbols which are easily seen on many of the ancient forts, temples and tombs.”— Ray V. Denslow

“A very interesting book on the subject entitled Indian Masons’ Marks of the Mogul Dynasty, has been written by Bro. Gorham.”

Now, I don’t want to get into a deep explanation of this book or these marks.

My point for this post, and for my two previous blog posts, is simply to suggest that an “Arabian” form of Freemasonry surely existed, though scholars don’t recognize it.

Why? Because there’s a deeper meaning behind the Triptych; it symbolizes a lost ancient Sacred Science perpetuated by the Freemasons.

Stay tuned for more evidence that reveals how the Triptych (and the Sacred Science it symbolizes) is the real-life Lost Symbol of the Freemasons.

Or visit www.DeeperTruth.com for more.