In recent years, a great deal of information has appeared online linking the Freemasons to a grand “conspiracy.”

According to this idea, the Freemasons have for centuries been secretly plotting world domination (i.e., a “New World Order”).

I’ve been asked if my upcoming book, Written In Stone (www.DeeperTruth.com), is related to this subject.

The answer is no.

Instead, my research reveals how the ‘Great Secret’ of the Freemasons has been Written In Stone—written into the stone architecture of churches, castles, cathedrals and other Masonic buildings worldwide—by the Freemasons themselves.

That is to say, the operative Freemasons encoded the same message, over and over again, in all of the medieval buildings they constructed.

The message they encoded relates instructions on how to understand and master an ancient Sacred Science of the Soul now lost to the Western world.

With this in mind, I’ve made a list of 10 Powerful Facts about the history of the Freemasons, in response to some of the questions I’ve been asked.

#1 – The Freemasons are one of a few Secret Societies carrying Ancient Wisdom across the ages. A glimmer of this ancient wisdom is still visible in their signs, symbols, and ceremonies, though much of it has been distorted (while some has remained intact).

Think for a moment about what this means. Imagine it; the world was united in ancient times  by the same body of spiritual wisdom.

#3 – In honor of the ancients, the medieval Freemasons carved the Triptych (symbol of the Sacred Science) into the architecture they created—cathedrals, castles, churches, abbeys and other important buildings. We can see this in the Triptych entry of Gothic cathedrals:

#5 – The closest thing available today to the authentic Sacred Science of the Freemasons is found in a mix of Gnosticism, Hinduism, Sacred Geometry, and ancient Greek and Sicilian philosophy (Plato, Socrates and Pythagoras).

#6 – The Freemasons “changed” in the mid 1800s, during which time the heritage and truth about the Sacred Science was stripped from the Order. The Freemasons became an “eating and drinking society” with a newfangled creed focusing on Faith, Hope and Charity. Ever since then, the spirit of true Freemasonry has been lost.

#7 – Modern Freemasonry is not authentic because it has been painted in terms of the religion of Judaism. For example, the Masonic holy book is now the Bible. The “God” of the Bible is thought by most Masons to be the Great Architect of the Universe (key figure in Masonic ritual). Masonic symbolism is now centered around the “Temple of Solomon,” which once stood in Israel. There’s more. All this serves to confuse rather than enlighten Masons on the Order’s founding secret—the ancient Sacred Science, and the powerful unified history of humanity.

#8 – Most Masons today are neither part of a grand conspiracy, nor interested in the true esoteric meaning of Freemasonry. They’ve joined either for the social conviviality or to further their own careers. I once read that modern Freemasons can barely organize a picnic, let alone put together and fulfill a plan for world domination.

#9 – The Masonic “G” symbol absolutely, positively DOES NOT stand for the “God” of the Bible. Instead, it denotes “Geometry,” which is the Sacred Science of the authentic operative Freemasons. (Read Plato’s dialogues on Geometry for more). To believe the “G” symbol stands for “God” is to completely misunderstand the true history of the Freemasons and the purpose of the Craft.

#10 – A key Masonic architectural symbol is the Triptych. It’s nothing short of the real life “Lost Symbol of the Freemasons” (to borrow from Dan Brown). The Triptych appears on all things Masonic, in honor of the Sacred Science.

For example, here is a Masonic Temple with Triptych entrance: 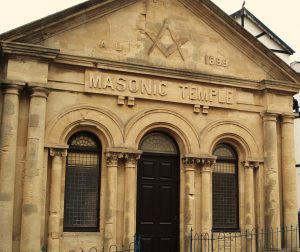 Modern-era Secret Societies that have been “spun off” from the Freemasons use the Triptych. We see this in the Triptych entryways of their headquarters. One example is the Skull & Bones, founded at Yale University in the early 1832:

Another is the Ancient Order of the Nobles of the Mystic Shrine, founded in 1870, headquartered in Washington D.C.:

Both of these headquarters have Triptych entryways.